“We have-worked with Elliott-Properties-continuously over-the-last-four years-on complex pharmaceutical/healthcare projects in Dublin and Kells. The total value of this work was in the order of €5 million of which almost 50% was builders work. The work included:-

Elliott Properties were also the lowest tenderer for a €2 million office refurbishment project which we expect to proceed in mid January 2014 and we are currently in negotiations with them on a €1.7 million pharmaceutical fit out.

The work on the above projects was all carried out to the stringent standards required to pass F.D.A., I.M.B. and E.P.A. inspections.

Elliott Properties were responsible for all programming , supervision and health and safety on the sites, including specialist equipment installers employed directly by the clients.

The projects were well organised with weekly meetings with all the sub-contractors and with the clients to ensure that programmes were met and production was not interfered with. Cost reports were provided on a regular basis which ensured that the final accounts could be agreed in a timely manner.

We feel confident in recommending Elliott Properties for similar work in the pharmaceutical and related industries.”

What Our Clients Say

Elliott Properties Ltd. have worked on many projects over the years for Forest Laboratories, with most of these works being very specialised and of a highy sensitive nature. Throughout our years of working with Elliott Properties Ltd., we have found them to be extremely professional in their service to us and always delivering our projects on time and within budget. Their excellent management both on and off site ensures an excellence of quality which is typical of their work.

Elliott Properties Ltd. are very proud to be registered and approved members of CIRI & CIF. Registration with these bodies ensures our compliance with all required standards within the construction industry. CIRI is the only register of construction companies in Ireland that is vetted by Government nominees and industry professionals. It has been set up set up to help members of the public find competent, experienced construction practitioners and recognises construction companies with a track record of competence and experience. 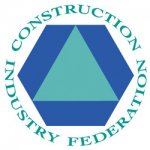